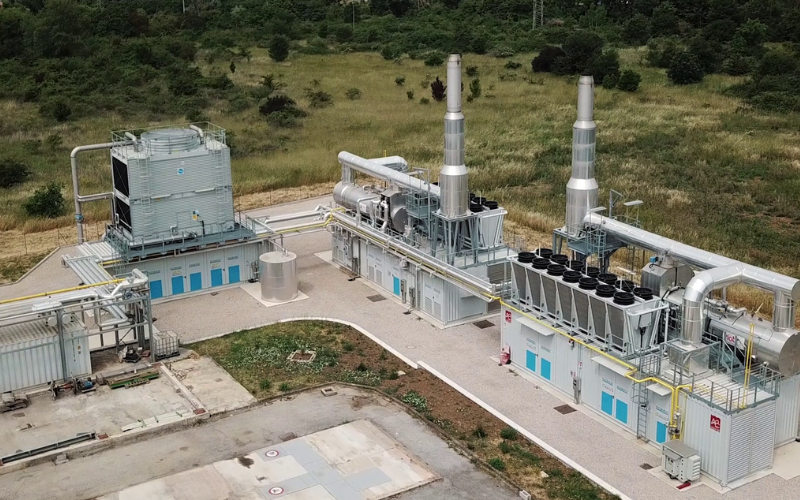 With AB’s CCHP, the Perugina facility in San Sisto is continuously improving its energy efficiency

For several years now, the Nestlé Group has been working on various assets in order to achieve the targets for reducing greenhouse gas emissions. In fact, over the last 10 years Nestlé has achieved an overall reduction of about 45% of its CO2 emissions at its sites in Italy.

Thanks to the recent installation of AB's new CCHP plant at the Perugina facility in San Sisto (PG), the Group has taken a further step towards an increasingly efficient use of energy.

The AB plant was installed in the Perugina facility at the end of 2020 to replace a previous CCHP plant which ceased being operational after more than 15 years.
The CCHP generator installed consists of two 3.3 MW and 2.7 MW electrical power units. Each group is composed of an internal combustion engine powered by methane which moves an alternator to generate electrical energy. The heat of the engine and of the fumes, through the exchangers, produces steam and hot water. There is also an absorber which uses the residual thermal energy to produce chilled water. The plant works 24 hours a day and the engine speed can be adjusted so that the energy produced added to that of the photovoltaic system is instant-by-instant equal to the needs of the facility.

Thanks to the thermal energy produced by AB's CCHP generator, the steam generators work to a small extent, only to keep the steam pressure in the network constant. The thermal energy that is exploited reaches 3.5 MW and this avoids burning up to 400 cubic meters of methane gas every hour. In practice, every four hours, the methane consumed by an average family in one year is saved[1].

This, combined with improving energy efficiency, the production of electrical energy from photovoltaic systems and the fact that the electrical energy purchased from the network derives from renewable sources, has allowed the San Sisto facility to reduce CO2 emissions into the atmosphere by 30% in 5 years, achieving an average saving of 2,400 tons per year compared to the 2016 emissions[2].

The Perugina facility is one of the Group's leading production sites at an international level. Thanks to a significant recovery and development plan that took place a few years ago, the San Sisto facility is in fact considered the international HUB for the production of chocolate in Europe, a company that operates by combining production excellence, tradition and sustainability. Today, the facility has over 600 permanent employees and about 200 seasonal ones. About 500 Nestlé branded products are produced in the same facility, including the iconic Baci Perugina which turn 100 this very year. Baci Perugina were in fact born in Perugia in 1922, when Luisa Spagnoli, one of the most influential Italian figures of the early twentieth century, created the chocolate which is now considered an icon of Italianness and universal love. Although 100 years have gone by since their birth, Baci Perugina continue to be produced in their hometown and from here they are exported internationally all over the world.

Similarly, as evidenced by the recent installation of the new AB CCHP plant, a further element that characterizes the San Sisto facility is the focus on environmental impact. In fact, CO2 emissions per ton produced have dropped by 37% over the past 5 years; in addition, energy consumption per ton produced was reduced by 36% and water consumption by 53%. The initiatives that have allowed achieving these results include: the photovoltaic system in the parking lot and on the roof provides 1.2 MW of peak power, the reuse of water in the cooling towers and the optimization of energy for air conditioning that is the most "energy-consuming" user of the site. In addition, the Zero Waste for Disposal goal was achieved in 2016, when more than 90% of the waste produced in the manufacturing site was sent to be recycled or exploited.

"A CCHP plant like this from AB is perfectly suited to a confectionery industry such as ours that needs electricity, hot thermal energy (heating the pipes and silos, conditioning the process areas, conching) and cold thermal energy (chocolate tempering, chocolate cooling, conditioning the packaging areas). Thanks to the efficiency of the plant and to the exploitation of all the energy carriers produced by the CCHP generator, we are able to achieve a total efficiency of up to 67%." declares Mr. Graverini, in charge of maintenance, industrial services and engineering at the Nestlé facility in San Sisto.

[1] Considering an average consumption of 1400 standard cubic meters per family. Source: ARERA - Energy: - 10.2% for electricity and -10% for gas. The Authority approves the first reduction in bills after 18 months. The bonus for families in difficulty has been extended and strengthened.