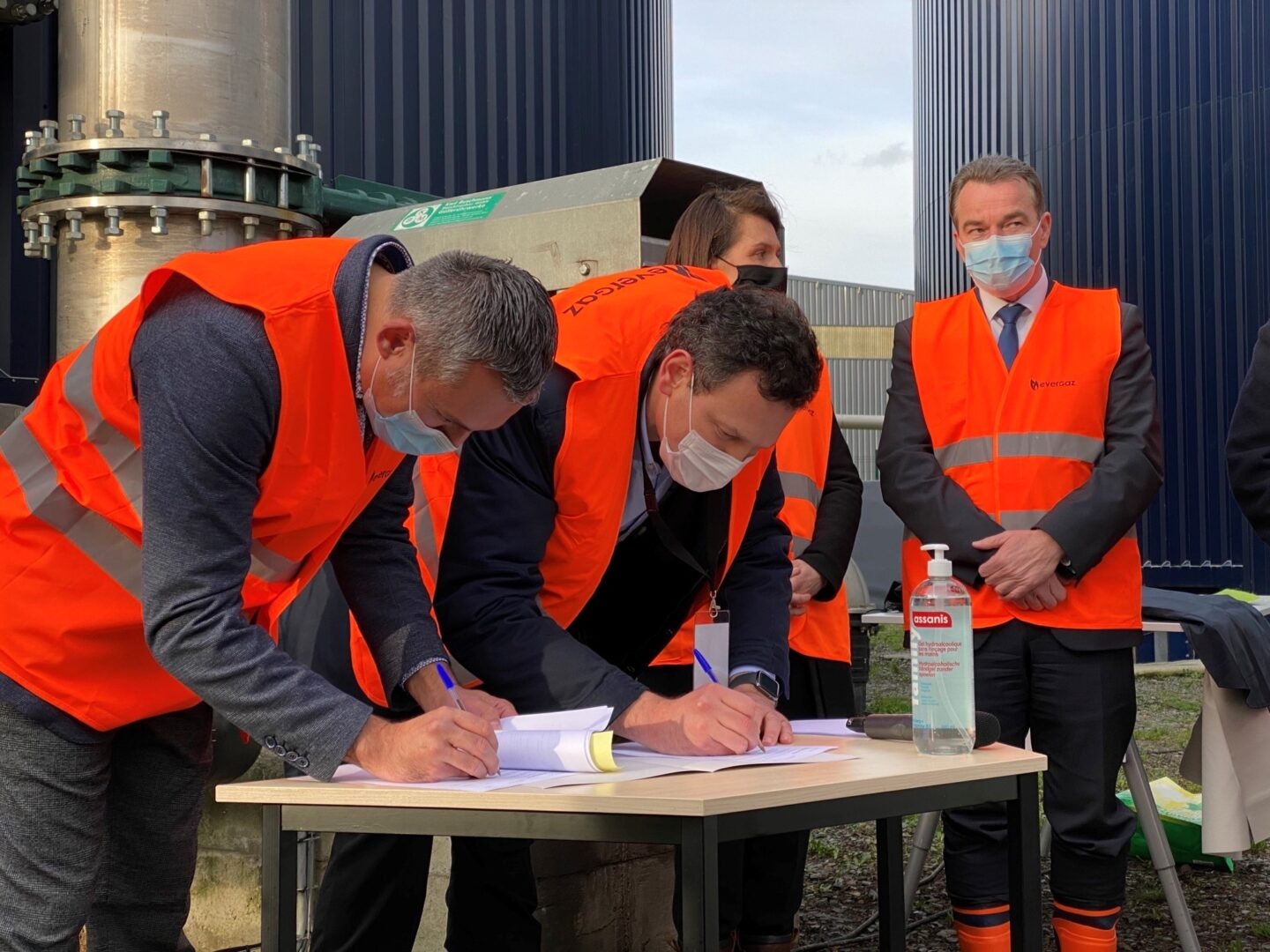 AB SIGNED AN AGREEMENT FOR THE SUPPLY OF A BIOCH4NGE FOR A BIOMETHANE PROJECT AT BIOGAZ DU PAYS DE CHÂTEAUGONTIER SITE, OPERATED BY EVERGAZ.

On Wednesday 17 February, Evergaz, one of France’s leading biogas players, welcomed the President of the Regional Council, Mrs Christelle Morançais, Mrs Céline Broquin-Lacombe, Sub-Prefect in charge of economic recovery for the Prefect of the Mayenne department, and Mr Philippe Henry, President of the Pays de Château-Gontier Community of municipalities, to the Biogaz anaerobic digestion unit du Pays de Château-Gontier (Mayenne), to lay the first stone of its biogas scrubber. With this scrubber, the site will become the first of the Pays de la Loire Region to provide a comprehensive range of green energy sources: green electricity, green heat, bioNGV, and now biomethane. The Biogaz du Pays de Château-Gontier facility will therefore become one of the pioneering sites in France to offer four energy recovery methods.

The facility prevents 4,965 tonnes of CO2 emissions per year and enables the spreading of natural fertiliser on the fields of 63 local farms, covering 4,500 ha.

The development of the Château-Gontier sur Mayenne site perfectly illustrates the joint project of Evergaz and Meridiam, who joined together in 2018 in the form of an investment platform to finance and develop biogas projects in France. With this investment, Meridiam, an independent Benefit Corporation specialising in the development, financing, and long-term management of sustainable public infrastructure, confirms its clear commitment to the ecological transition of territories, as the Biogaz du Pays de Château-Gontier facility, commissioned by Evergaz in 2018, has been designed as a territorial project. A perfect example of circular economy, the facility recovers the organic matter produced locally by farmers, agri-food industries or the community. It supplies the equivalent of 3,200 homes with green electricity, for a treatment capacity of 35,000 tonnes of waste per year. The green heat generated by the site is used, via a heating network cofinanced by ADEME, by the production process of the Perreault cheese factory located near the unit. Initially generating electricity and heat from organic waste via cogeneration, Evergaz also built a bioNGV station open to the public in direct proximity to the unit, making it possible to supply the vehicles of the Pays de Château-Gontier community of municipalities and the lorries of the Breger transport company with green fuel.

By signing an agreement with GRDF for the injection of the biomethane produced by Biogaz du Pays de Château-Gontier into the natural gas network, Evergaz provides the region with the first anaerobic digestion unit of the Pays de la Loire Region to offer these 4 recovery methods.

Christelle Rougebief, GRDF Centre Ouest’s Clients-territories Director, says: “The Loire region is one of the most dynamic in the development of anaerobic digestion and green energy. The connection of the Evergaz site to the network operated by GRDF is a perfect illustration of biogas development. Regional green gas production is currently equal to the gas consumption of 37,000 homes heated with biomethane” .

The anaerobic digestion unit visited by the President of the Regional Council enables the local production of green, circular and non- intermittent energy, while offering numerous positive externalities (reduction in CO2 emissions, preservation of agriculture, etc.). It also provides a solution for the recovery of organic waste and the production of a natural fertiliser substitutable for chemical fertilisers.

“We are pleased to see the President of the Regional Council laying the first stone. This visit allowed us to show her, in concrete terms, the vast energy potential of biogas for the region. In addition to generating 4 forms of green energy, the waste treatment function of anaerobic digestion, as well as its ability to produce natural fertiliser, should also be pointed out. Biogas provides the territories with a genuine environmental service” says Frédéric Flipo, Managing Director of Evergaz

According to Thierry Déau, CEO of Meridiam: “With this new investment, the Biogaz du Pays de Château- Gontier anaerobic digestion facility will provide the territory and its inhabitants with the most comprehensive range of green and renewable energy: green electricity and heat, bioNGV to supply vehicles with green fuel, and biomethane to be injected into the GrDF network for home heating purposes. A real circular economy project dedicated to the territories, their inhabitants and ecological transition”.